One of the biggest confusions when it comes to chocolate are the terms cacao and cocoa. They’re spelt similarly and are often pronounced the same way as well. So, are they interchangeable? Do they really just mean the same thing?

Whilst cacao and cocoa do have similarities, there are differences. In this post, we’ll explore what those differences really are and why it matters.

The word ‘cacao’ originates from the indigenous Nahuatl word ‘kakawatl’. Although Nahuatl was the language of the Aztecs (1300 AD), evidence suggests that the word actually dates as far back as the Olmec people, the earliest known major civilisation in Mesoamerica (1500 BCE). When the Spanish eventually arrived in the Americas they translated the word ‘‘kakawatl’ to ‘cacao’.

So where does ‘cocoa’ come from? Well, it’s widely believed that the term ‘cocoa’ originates from a spelling mistake when the English translated it from Spanish. This is why in Hispanic languages cacao is the only word that’s ever used, whilst in English cocoa is more common. It’s a mistake that was never corrected, perhaps because the English thought it was easier to pronounce.

Despite having just learnt that “cocoa” is the English adaptation of the Spanish word “cacao,” there are subtle differences in the meaning of the two terms that have developed over time. Let’s take a look at how chocolate is made in order to understand this difference.

The botanical name for the chocolate tree is Theobroma cacao, also known as cacao tree. This tree produces cacao pods which are harvested and cut open to reveal cacao beans. In order to make these beans fit for consumption, they are fermented and dried. Now, as you may have noticed up until this point we have only used the term “cacao”.

The dried beans are then roasted in an oven to produce cocoa beans and cocoa nibs. These roasted cocoa nibs are eventually used by chocolate makers to make bars, bonbons, and other delicious chocolate products. Therefore, once the dried cacao beans have been processed in one form or another they take on the term ‘cocoa’.

In summary: Cacao refers to the pod and beans derived from the chocolate tree, Theobroma cacao. The term cocoa is used once the beans have been roasted and turned into nibs and powder, which are then used chocolate bars and other products.

Misinformation on Cacao vs. Cocoa

There has been a growing interest in cacao over the last years, thanks largely to the rise in the paleo and raw vegan diets. However, a simple search on Google will reveal a host of articles packed with false information on the apparent health differences between cacao and cocoa. These articles often attempt to glorify cacao as a natural and raw food, whilst demonising cocoa as an overly processed product.

However, in order to turn the freshly harvested cacao bean into any sort of powder, nibs, or bar, the temperature will have to exceed 48°C and the beans need to be processed (i.e. fermented, dried, and crushed). This is a very natural way of processing food, but it’s processed nonetheless and that doesn’t mean that it isn’t healthy!

Another fallacy we’ve noticed are images depicting cacao vs cocoa powder; whereby the cacao is a lighter colour and the cocoa is a dark chocolaty colour. This has nothing to do with the product being cacao or cocoa and instead has everything to do with how it’s been processed into a powder. The two correct terms are known as ‘dutched’ and ‘undutched’ cocoa.

Pure cocoa powder, or ‘undutched’, is slightly acidic with a pH value between 5.3 and 5.8. This cocoa powder is lighter in colour and is perfectly edible. Because of its slightly acidic characteristics, it has a tendency to be more difficult in terms of how it reacts with other ingredients and how soluble it is.

To make cocoa powder an easier substance for baking, the dutch in the 19th century invented the ‘Dutched’ cocoa powder. Dutched cocoa powder is less acidic with a pH value between 6.8 and 8.1. In order to make it less acidic, the beans are washed in an alkaline solution.

Therefore, natural, undutched cocoa is less processed and therefore has more antioxidants and flavour than dutched cocoa. However, it has nothing to do with it being cocoa vs. raw cacao. 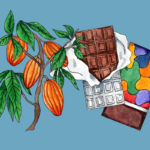 Bean to Bar: How Chocolate is Made