Everyone loves chocolate, but not everyone is aware of ingredients in a bar of chocolate. When it comes to chocolate, less is more! A good chocolate should have no more than around 4 ingredients. Cocoa beans, cocoa butter, sugar, milk powder or alternative mylk (if it’s a milk chocolate), and sometimes the addition of an emulsifier.

Good chocolate is a superfood. It’s made of cacao, which has been consumed for thousands of years as a rich source of antioxidants, good fats and minerals. Some of the health benefits of chocolate include:

Pro Tip: The order the ingredients are displayed is important, as they’re categorised in order of quantity. You would expect your chocolate bars first ingredient to be cocoa, what chocolate bars are made from and the only non-negotiable ingredient, but this isn’t always the case.

Let’s take a closer look at the ingredients in chocolate.

There’s one ingredient you cannot make chocolate without and that’s cacao (also known as cocoa). In 100% percentage chocolate you don’t use anything else, so the cacao and how it has been crafted needs to be perfect to create a delicious flavour and speak for itself.

You will see the cocoa ingredient for milk and dark chocolate stated in your ingredients list as any of the following:

The specific variety of cacao used will impact the flavour, as well as the percentage present and how it has been processed and turned into chocolate. Three of the most well-known varieties of cacao are Forastero, Criollo, Trinitario, but there are hundreds or further strains and crossbreeds all with differ- ent coloured pods, different sized beans and unique flavour profiles.

Sugar is a key ingredient to most chocolates. The amount used can vary greatly, but it can and is the main ingredient in many bars. Without sugar, chocolate can taste quite bitter, as roasted cocoa beans are not naturally very sweet.

The type of sugar used will also impact the final flavour, some varieties and names you might find are:

You can also buy sugar-free chocolate that is made especially for people with dietary requirements that mean they have to avoid sugar, like diabetes. This kind of chocolate is usually made with sweet- eners such as erythritol, stevia and xylitol.

Some dark and milk chocolate bars will also contain added cocoa butter, which is the natural fat from the cocoa bean that adds a delicious flavour and creamy texture to the chocolate. The addition of cocoa butter takes your chocolate from being classified as two-ingredients to three-ingredients, despite being a natural component of the cocoa bean. Cocoa butter is also the only cocoa component present in white chocolate, which is why it is so much lighter in colour.

Cocoa butter is a nutritious and healthy fat, filled with antioxidants, and holds lots of cocoa flavour and aroma.

Milk is one of the main components in milk and white chocolate. Because cows milk is naturally high in sugar it adds a sweet and creamy element. Although cow’s milk is the most common, ewe and goat milk can also be used to make chocolate.

Milk powder was first introduced into chocolate in 1875 by Swiss Chocolatier, Daniel Peter. Henri Nestlè, who discovered how to manufacture powdered milk in 1867, was Peter’s neighbour, and he combined his chocolate confectionery with Nestlè’s powdered milk to produce the world’s first solid milk chocolate bar.

Because milk is a major allergen it will be both in bold and then often in parentheses on the chocolate bar packaging. Different terms you might find include:

Because of milk intolerances, allergies and the rise of veganism, more and more animal milk alternatives are being found within chocolate. This also makes a big difference to the final flavour of your chocolate. For example, a coconut milk chocolate bar will have a noticeable coconut flavour, and certain plant-based milk might add less sweetness than cows milk does.

Mylk is used in a similar way as milk, by being dried into a powder and combined with the cocoa mass to create a milk or white chocolate bar, but because of specific flavour notes and changes in texture, recipes will often be adapted to suit and complement the specific mylk used. Filled chocolates and truffles can also be made dairy-free, so now everybody can enjoy the taste of milk chocolate!

These are some of the milk alternatives you might find in chocolate:

Something you’ll often find in chocolate is an emulsifier. Although it is not an essential ingredient, the benefits of adding emulsifiers include allowing the chocolate to withstand heat better (not usually a friend of chocolate) and it helps to avoid blooming. It also aids in machine production, making it popular with larger manufacturers.

Chocolate purists sometimes debate the use of emulsifiers as they can be used as a replacement for cocoa butter (which is more expensive), however, it is generally accepted since it does not affect the overall flavour and is extremely helpful for chocolate makers.

These are some common emulsifiers found in chocolate:

The addition of cheaper oils and fats to replace cocoa butter on the ingredients list is common in many of the big chocolate companies. This is the first indicator of an unhealthy bar of chocolate, and is used primarily to increase profits. The cocoa butter which has been removed is often sold to the cosmetic industry, where you might find it in popular hair and skincare items.

Vegetable fats in chocolate is also unpopular with bakers, chocolatiers and pastry chefs as when you try to melt or bake with chocolate that’s made with added vegetable fats, the mix can separate and become grainy. Another reason why many people are against the use of vegetable fats is because of the environmental damage of oils such as palm oil, which are blamed for mass deforestation and the extinction of precious species and habitats.

In the United States, a chocolate bar can’t be called ‘chocolate’ if it contains vegetable fats. Though chocolate companies can get around this by describing their products ‘chocolate flavoured’, ‘choco- late-like’, and ‘chocolatey’. In the EU, chocolate makers can add up to 5% vegetable fats to their choc- olate, and it could contain any of the following:

Finding vanilla in the ingredients is most likely an indicator of a unhealthy bar of chocolate. Big chocolate companies use synthetic vanilla to mask burnt or off flavours in poor quality cocoa beans.

Real vanilla is one of the most expensive spices in the world and is notoriously difficult and time-consuming to pollinate and grow. In recent decades many synthetic varieties have created from all sorts of alternative materials to mimic the vanilla flavour we expect to taste (including wood shavings).

These are some of the ways vanilla may be found on the ingredients list:

Both natural and artificial flavourings can be added to give a different dimension to the bar, like in a whisky, coffee or raspberry flavoured chocolate. These hugely impact the final result and unlike the existing flavours within the cocoa that chocolate lovers love to unpick, will often be more obvious and dominating so only pick up this type of chocolate if you’re looking for that specific flavour addition. Flavourings can be added in a few ways, but generally, drops of oil are used as they don’t change the texture of chocolate as much and only require a small amount.

Both natural and artificial colourings can be added to chocolate to change the colour and appearance, this could be to outer shells (like smarties, or M&M’s) or to the chocolate itself. This is more common in white chocolate which is the easiest to colour, and can be decorative or fully changed from an off-white to pink, orange or something else. Another way that chocolate makers use colouring in their chocolate is to mix it into tempered cocoa butter and paint transfers, moulds or directly onto the chocolate to create a specific design.

Many chocolate makers add inclusions to their bars which could be anything from cocoa nibs to sea salt to freeze-dried fruit. Just like with added flavourings, these are there to enhance or add to the flavour of the chocolate and can be fun to try out if it’s a combination you enjoy or would like to try. 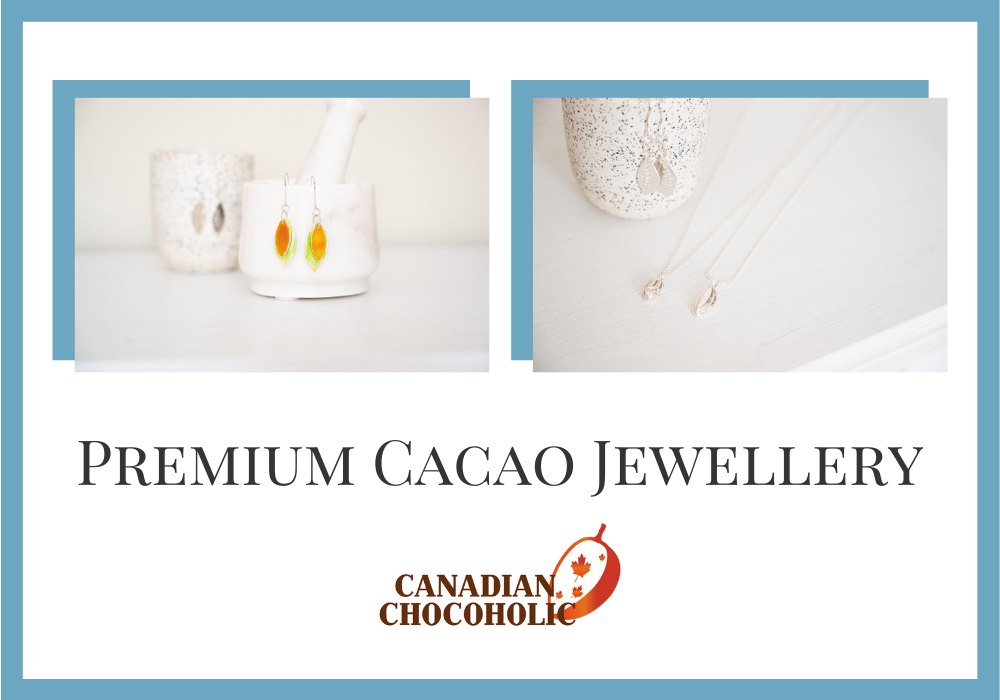 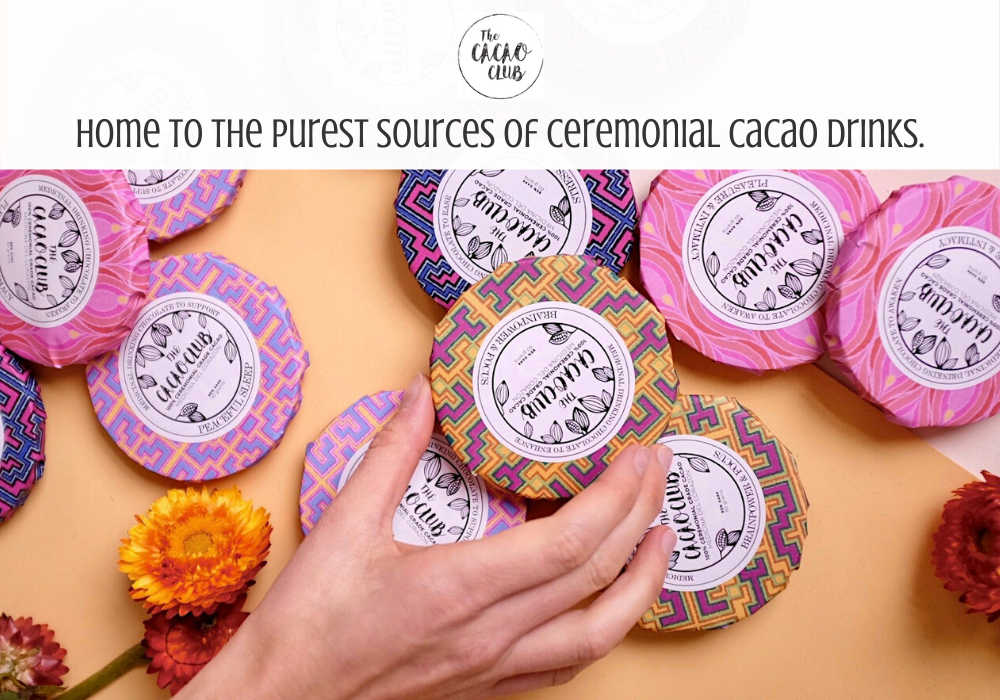 White chocolate seems to always divide people between those who love it and those who hate it. Moreover, the debate whether it really is chocolate..
Read More
Cacao Magazine
Worldwide shipping for only £4.95
No matter if you're in Canada or Hong Kong, we've got you covered! We offer a flat rate shipping fee of just £4.95.
Buy Now 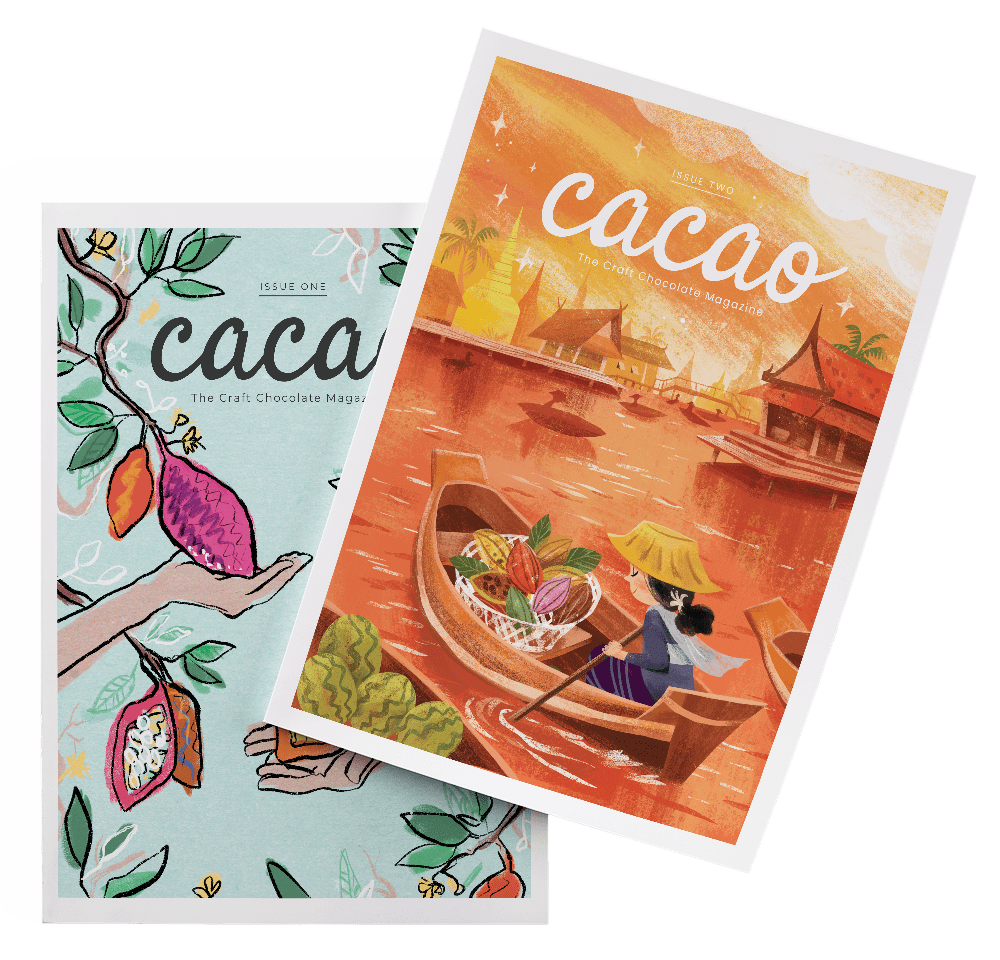