The craft chocolate industry has seen incredible growth over the last decade. In many countries around the world, craft chocolate has gone from virtually nothing to now boasting several dozen homegrown chocolate makers. And yet, craft chocolate is nowhere near as established as speciality coffee and craft beer.

The reason? So many people haven’t heard about craft chocolate, yet. Nor have they heard the reasons WHY they should buy a craft chocolate bar over the cheaper mass-market ‘premium’ brands in the supermarket.

Tired of seeing mass-market chocolate falsely marketed as fine and sustainable, we decided to write this post to explain exactly WHY to support bean to bar, craft chocolate instead. We break it down into three simple points: it’s better for the farmer, better for the environment, and better for you.

Better for the Farmer

Inequalities within the cocoa industry are well known. Whilst the chocolate industry is valued at over $110 billion, the harsh reality is that the average cocoa farmer in West Africa currently earns less than $0.80 a day. But that’s why we have certifications such as Fairtrade, UTZ, or Rainforest Alliance; right?

Whilst Fairtrade does provide a marginally higher premium for its cacao than uncertified cacao, the system of certification, unfortunately, has many shortcomings. To obtain a Fairtrade license, the farmer needs to pay an annual up-front fee. This license, in theory, is meant to assure the buyer that the cacao is grown ethically and slave-free and that a fair wage is paid to all working on the farm.

Unfortunately, journalists have time and time again uncovered that child slavery and other unethical practices were occurring on Fairtrade certified farms in West Africa. Furthermore, 90% of the world’s cacao is grown by small family farms who are unable to afford the costs required to obtain a Fairtrade certification. Whilst the intentions of such certifications might be good, in practice, they are largely misleading consumers searching for ethical chocolate.

Tom Rogan from Goodnow Farms explained to us that, “direct trade means a boots-on-the-ground, personal relationship with each producer and as many farmers as we’re able to meet. Visiting the farms and producers personally allows us to select the best cacao from a specific, limited geographic area and even a specific farm.”

From the beginning, Tom always saw the benefits of working directly with the cacao farmers. “We’re able to see farming practices firsthand and be confident farms are being managed in a sustainable manner.  We’re able to examine the fermentation and drying centres, which are so crucial to flavour development, and review fermentation and drying protocols in person, often customising them based on the flavours we’re looking for.  We’re also able to see the labour practices firsthand and speak with the workers who are harvesting the cacao pods and managing the post-harvest processes.”

Tom is one of many craft chocolate makers who works directly with cacao farmers. This is one of the biggest differences between craft chocolate and mass-market chocolate. The supply chain is traceable and transparent; makers like Tom know exactly where their chocolate comes from, how it’s been grown, and what conditions the farmers work under.

As of December 2018, companies such as Lindt, Mondelez, Ferrero, Hershey’s, and Nestle can trace less than 30% of their cacao back to the farmer. This lack of transparency allows for child slave labour and other unethical and unsustainable practices to occur – certification or not.

For Tom and his wife and business partner Monica, there are several reasons why they chose to work directly with cacao farmers. He told us that “one of the most important is to ensure farmers receive a fair price and one which is considerably higher than commodity rates. Inequities in the cacao supply chain are well known and we’re dedicated to making a positive difference in how farmers are compensated, especially considering the extra time and effort involved in growing and producing fine flavour cacao.”

“One of the most important is to ensure farmers receive a fair price and one which is considerably higher than commodity rates.”

Better for the Environment

Not only is craft chocolate more beneficial for the farmer, but it’s also better for the sustainability of the land where it’s grown. Bulk cacao for mass-market chocolate is often grown in monocultures, which has been linked to the evergrowing issue of deforestation. Cacao farmers and cooperatives of fine cacao are busy working to conserve the last remaining biodiversity hotspots and protect ancient cacao varieties.

Original Beans takes pride in discovering some of the rarest varieties of cacao in the world. They have a dedicated Bean Team which, “roams the remotest corners of the world, often working on-site with indigenous tribes such as the Arhuaco in Colombia or the Zoque and Tzotsil indigenous people in Mexico abandoning the often common slash-and-burn and switching to semi-wild land use instead with mixed cocoa crops, which is much more sustainable.”

As well as working with indigenous tribes to preserve ancient forests, Original Beans has also been busy planting trees themselves. Their One Bar One Tree scheme, which means for every bar they sell they plant a tree, has seen them reforest over two million trees around the world. Are we showing them off to much? Maybe. But it’s difficult not to when it comes to craft chocolate as this is a growing industry that genuinely can make a huge positive social, environmental and economic global impact.

The Theobroma cacao tree originates from Central and South America where it grows as an understory tree in the rainforest. Cacao is sensitive to light, temperature and humidity; which is kept constant in a biodiverse environment. Therefore, unlike other crops such as coffee or palm oil which can be easily grown in monocultures, cacao needs other plants to thrive.

Around the world, cacao is increasingly grown in agroforestry systems. Agroforestry is the concept of growing various trees and crops alongside each other; as opposed to large fields of one single crop (monoculture). This ancient farming technique not only benefits plants, insects and wildlife, but is also much more sustainable and environmentally friendly.

Bulk cacao for mass-market chocolate usually requires large amounts of chemical fertiliser and water to maintain the nutrient rich soil that cacao needs. However, cacao cultivated in agroforestry systems requires much less fertiliser as the organic matter is much higher allowing for a naturally rich soil.

Finally, agroforestry systems where cacao grows alongside other crops can sequestrate much more carbon than monoculture plantations. Stéphane Saj, an agro-ecologist with CIRAD explained that, “the carbon capture capacity of a mature cocoa agroforest is between 5 and 10 tonnes per hectare. We have measured as much as 180 tonnes per hectare in certain zones in Cameroon…[that’s] much better than cocoa monocultures.”

What are the health benefits of fine chocolate?

Various studies over the last few years have discovered that cacao is packed with antioxidants and flavanols. Diets high in antioxidants and flavanols have shown to benefit cardiovascular health, provide anti-inflammatory properties and help regulate blood sugar. Recent research suggests that consuming dark chocolate which is high in cacao has positive implications on stress levels, mood, memory and immunity.

However, here’s the catch: not all chocolate contains the same amount of antioxidants.

Craft chocolate makers take pride in their high quality and short ingredient lists. A bar of craft chocolate is usually made of cacao, cocoa butter, and sugar. The emphasis for craft chocolate has always been on flavour, texture and taste – which means the cacao is the star of the bar.

Just like there are many different types of apples, so too are there different origins and genetic varieties of cacao. Craft chocolate makers and farmers spend a lot of time perfecting the ideal level of bean fermentation, making sure the beans dry correctly and fine tuning the roast profile.

Unfortunately, this isn’t the case when it comes to industrial chocolate. No matter how hard Lindt try to market their chocolate bars as ‘luxury’ and ‘fine,’ the reality is they use bulk cacao where the vital flavour developing stages of fermentation, drying and roasting are given little thought.

So how do they produce chocolate bars? They alkalise their beans by washing them in an harsh chemical solution. By alkalising cacao beans, chocolate manufacturers are able to manipulate the flavour and colour by reducing the acidity of their chocolate. This is why mass-market dark chocolate is usually intensely bitter with little flavour and a overly dark colour.

Unfortunately, alkalising beans has also been proven to strip the beans of their vital antioxidants and flavanols by up to 80%. To combat the bitterness and lack of flavour as a result of the alkalisation, mass-market chocolate bars will usually add vanilla – the perfect flavouring to mask the taste of low-quality and unpleasant tasting beans.

Simply put: craft chocolate has much more flavour and is healthier for you than a mass-market bar – even if they have the same percentage on the packaging. So, if you’re looking for all of the health benefits in chocolate then go for craft every time.

Chocolate is comprised of several chemical compounds that affect our body and brain in various positive ways. Theobromine is an alkaloid that gives us that alert and chirpy feeling we get when we eat chocolate, without giving us the side-effects of caffeine.

Phenylethylamine is another chemical in chocolate you might have heard of. This natural chemical makes us feel loving, as Phenylethylamine stimulates the part of our brain responsible for feelings of pleasure. It’s this substance which saw chocolate be used as an aphrodisiac for much of the 17 and 1800’s.

All Good Things Come in Moderation

For decades, chocolate has had a bad reputation as a calorific candy that’s notoriously known for binging on; however, that’s not actually the case when it comes to craft chocolate.

Craft chocolate is synonymous to a fine wine in that it’s something you enjoy in moderation. Besides, with a bar of craft chocolate you’ll be satisfied even after just a few pieces thanks to the high quality cocoa butter and cacao contents.

Whilst we really don’t want to preach, our goal is to show off the amazing world of craft chocolate. This nascent industry is growing every year, with more fine cacao growers, chocolate makers and tasters like yourself joining the movement.

As the headlines on unsustainable deforestation and child slave labour demonstrate: the cacao industry as we’ve known it is broken. It’s an industry that’s causing huge social, environmental and economic damage because traceability and responsibility come second in line before cheap chocolate.

Our main driver with Cacao Magazine has always been to highlight the role models of the craft chocolate industry – from entrepreneurial cacao farmers to chocolate makers – who demonstrate first hand that a different, more ethical and sustainable chocolate market is possible.

Cacao Nibs: What Are They and How to Use Them 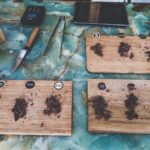 What is Cacao Agroforestry?